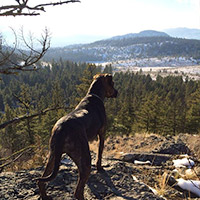 Chris has been tearing up the streets and hills on bikes for over 30 years. Whether it’s a long-distance trek to Lac La Jeune, or a quick morning ride with his dog (Roxy), or a downhill snow-packed day on Pineview, you can usually find him on one of his many bikes.

Born in Scotland, he grew up in South Africa, Pitt Meadows and Maple Ridge, before finally settling in Kamloops with his wife and kids – Kamloops is where he has called home for over two decades. He played soccer for many years before a knee injury forced him to call it quits, and he found himself back with his first true love: biking.

If you want a fantastic tour of the city, its amazing trail system, and a bike ride you’ll never forget, get in touch today!